This tutorial will walk you through the steps of editing a clause template in Template Studio. 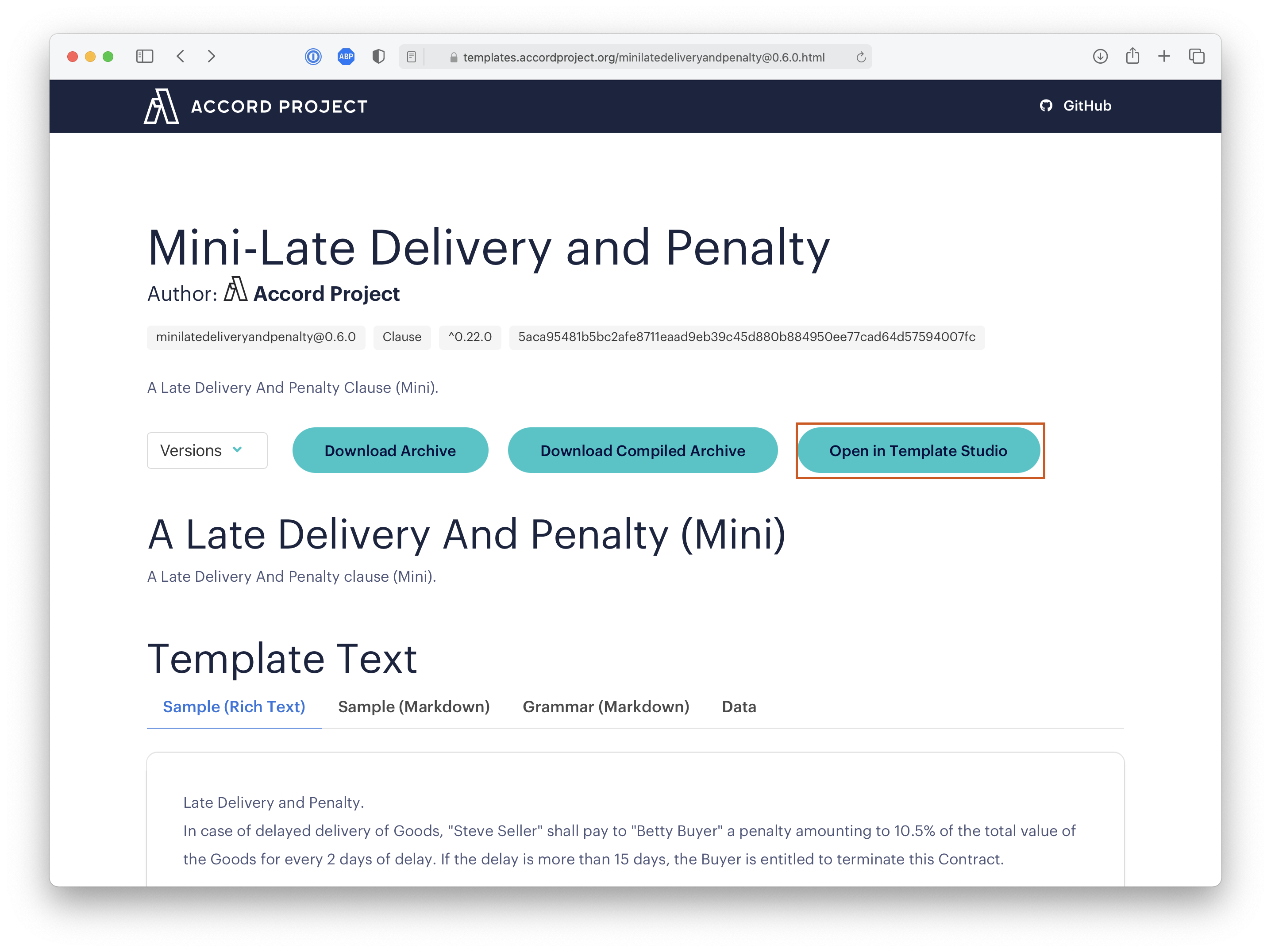 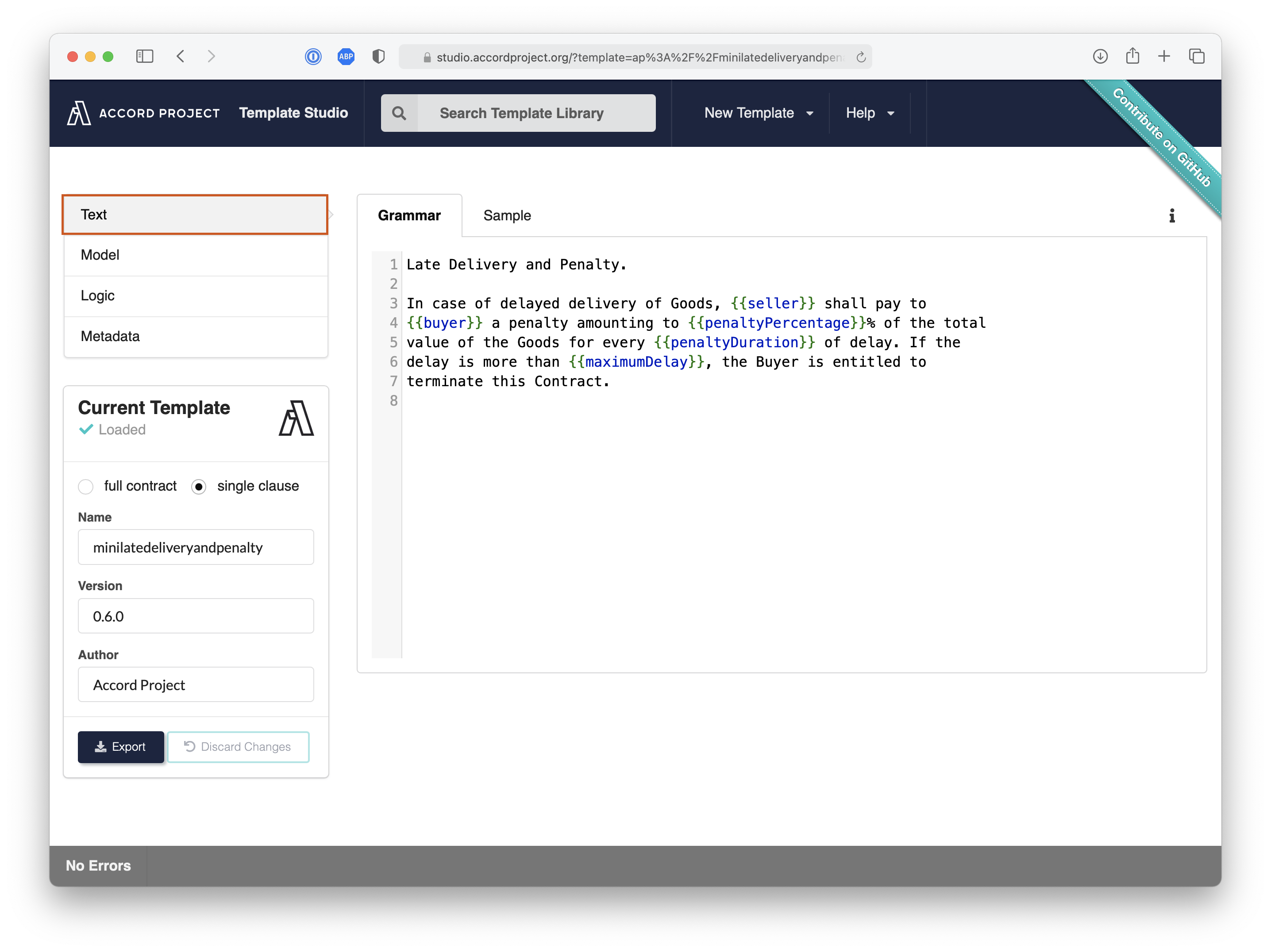 When the text in the Grammar tab is in sync with the text in the Sample tab, this means the sample is a valid with respect to the grammar, and data is extracted, showing in Contract Data tab. The contract data is represented using the JSON format and contains the value of the variables declared in the contract template. For instance, the value for the buyer variable is Betty Buyer, highlighted in red: 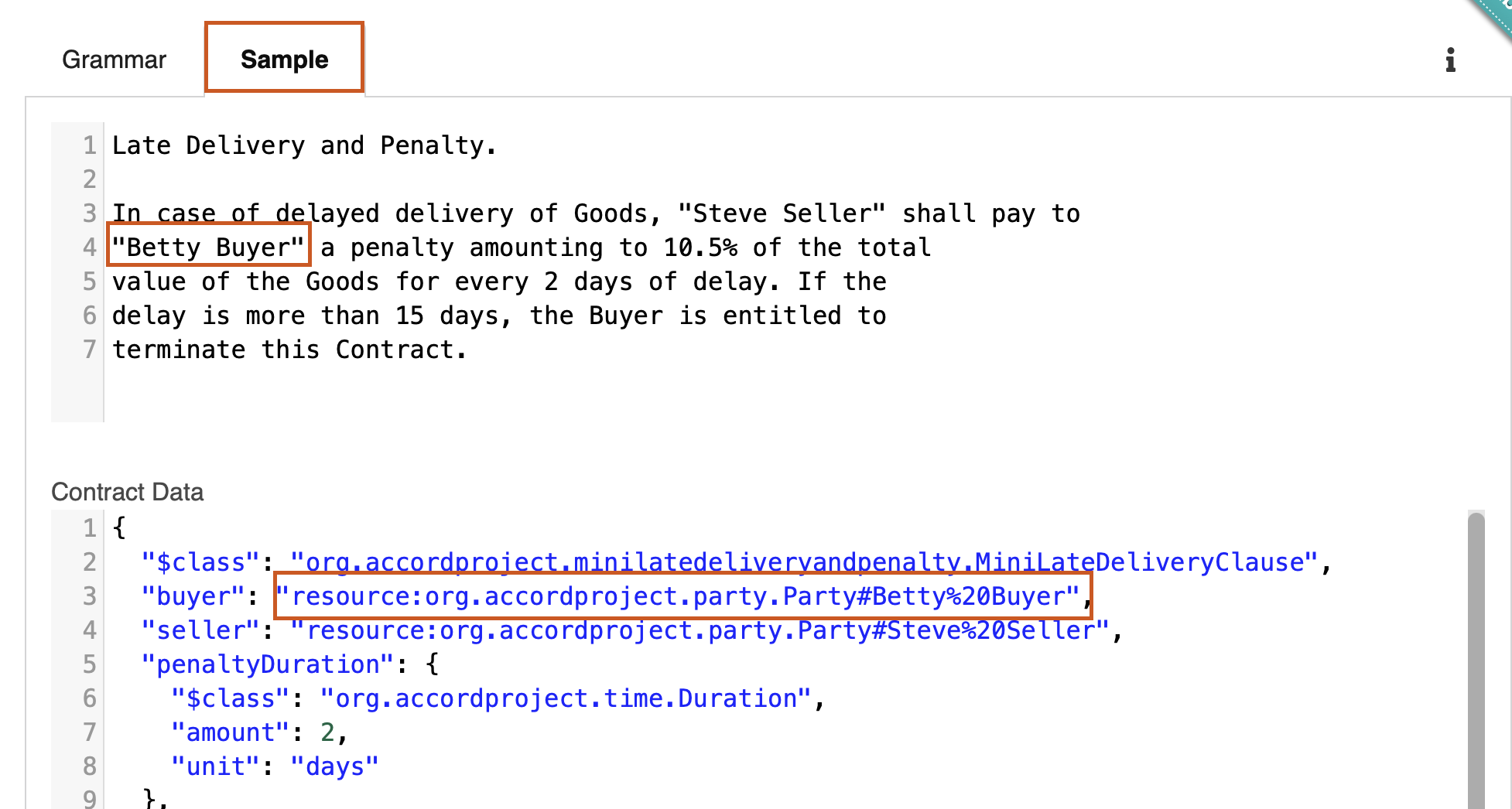 Changes to the variables in the Sample are reflected in the Contract Data tab in real time, and vice versa. For instance, change Betty Buyer to a different name in the contract text to see the partyId change in the contract data.

The JSON data resource:org.accordproject.party.Party#Betty%20Buyer indicate that the value is a relationship of type Party whose identifier is Betty Buyer. Consult the Concerto Guide for more details on modeling relationships.

If you edit part of the text which is not a variable in the template, this results in an error when parsing the Sample. The error will be shown in red in the status bar at the bottom of the page. For instance, the following image shows the parsing error obtained when changing the word delayed to the word timely in the contract text. 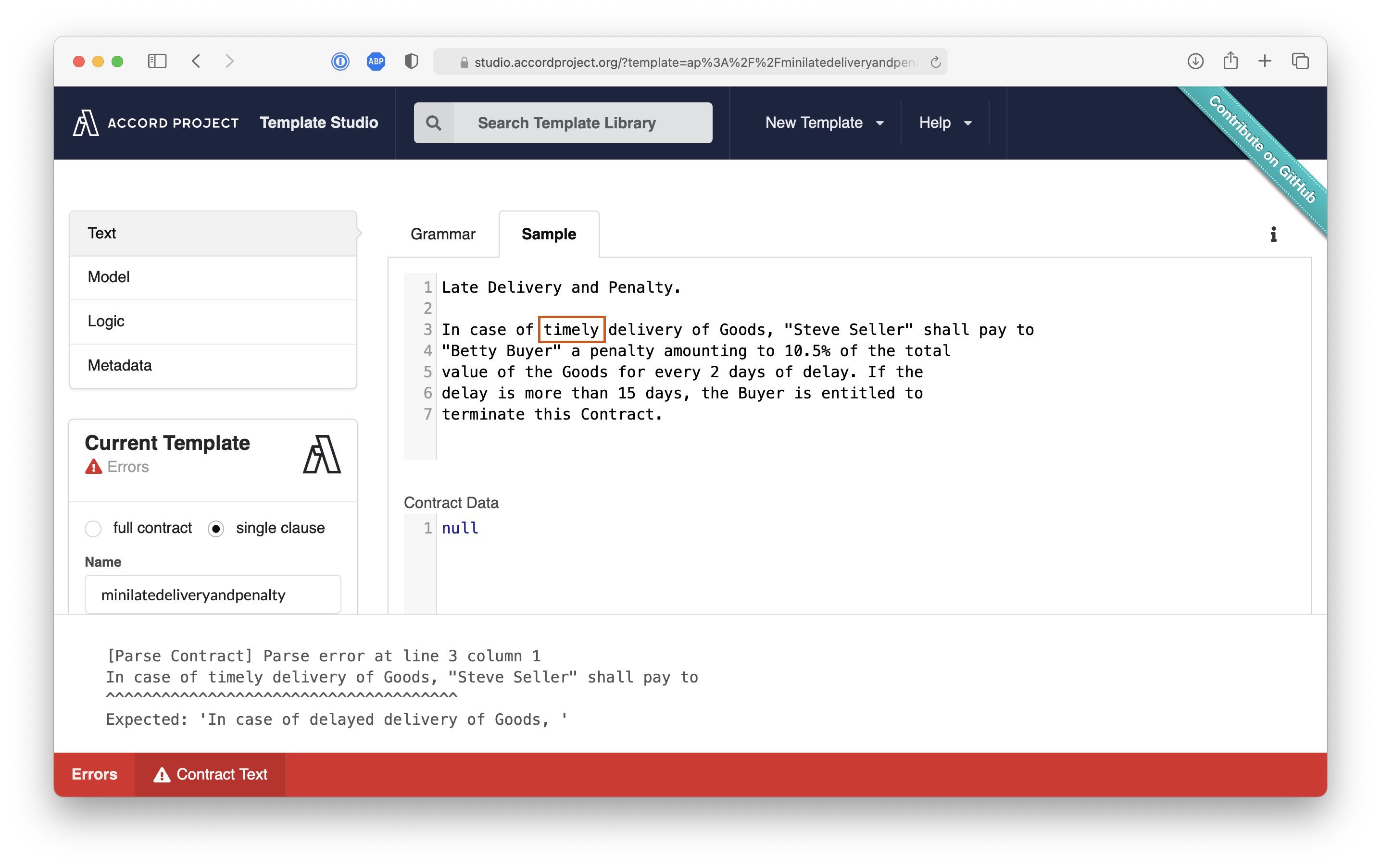 This is because the Sample relies on the Grammar text as a source of truth. This mechanism ensures that the actual contract always reflects the template, and remains faithful to the original legal text. You can, however, edit the Grammar itself to change the legal text. 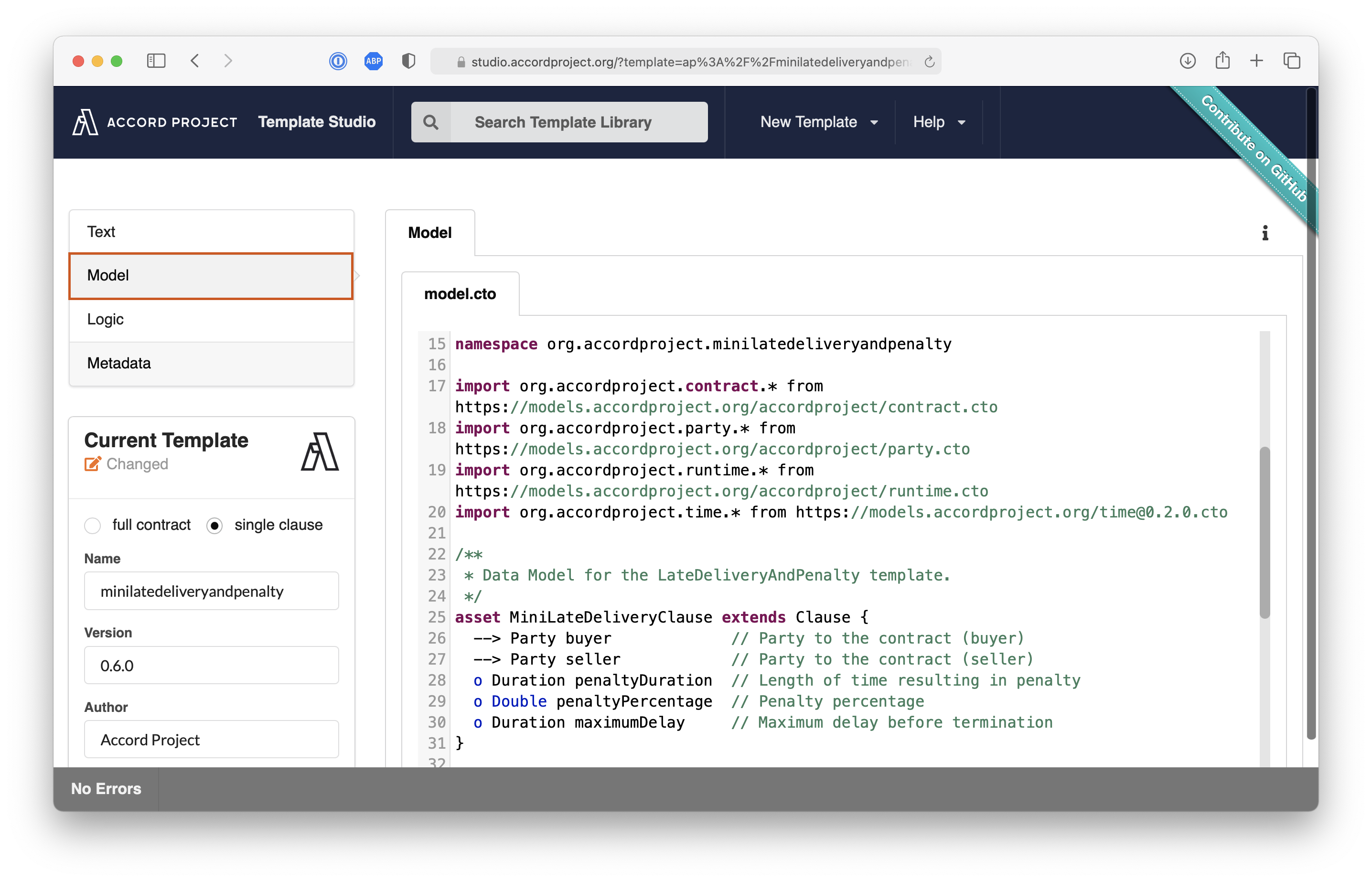 Note that a namespace is declared at the beginning of the file for the model, and that several existing models are being imported (using e.g., import org.accordproject.contract.*). Those imports are needed to access the definition for several types used in the model: 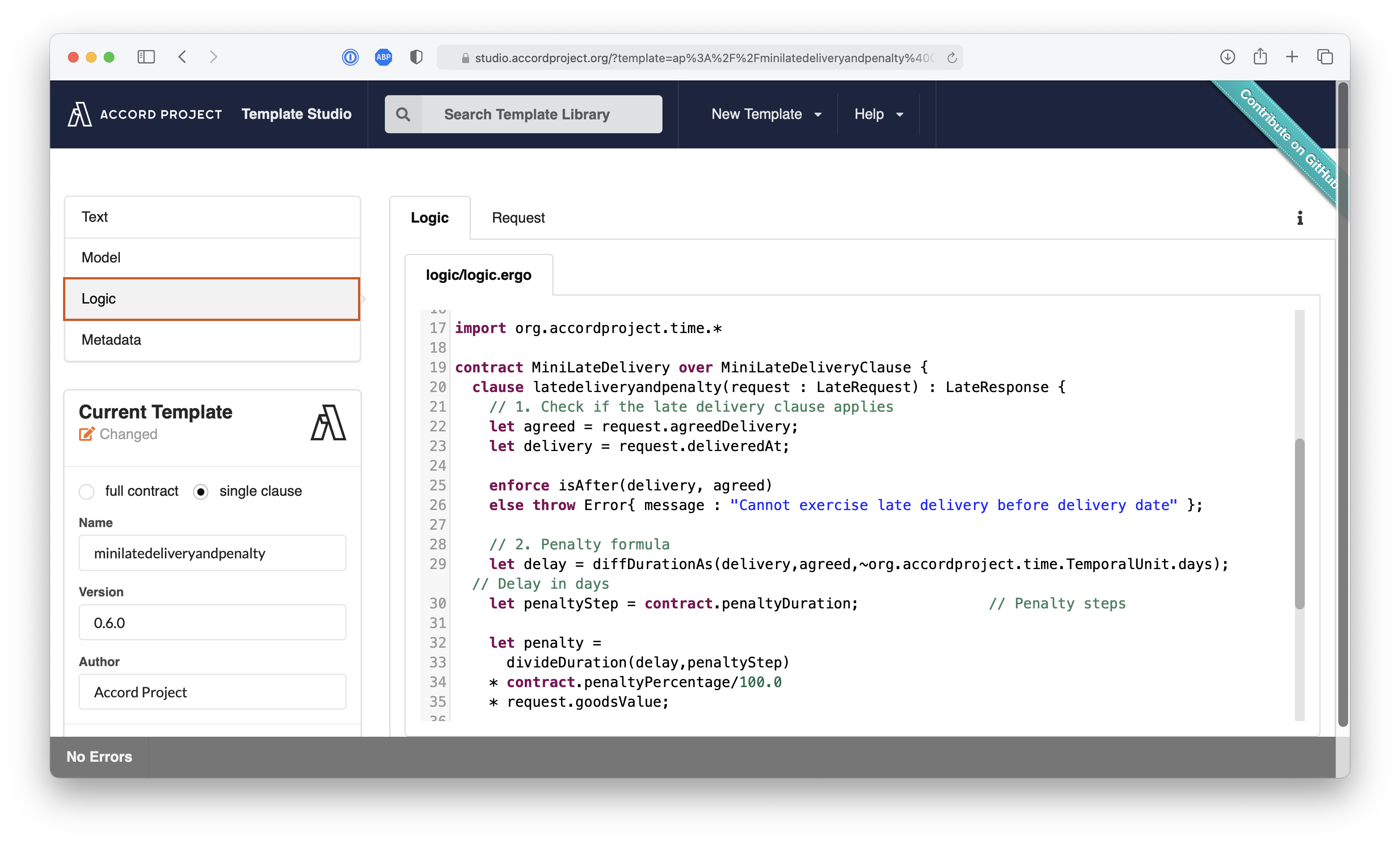 To test the template execution, go to the Request tab in the Logic section. It should be already populated with a valid request. Press the Trigger button to trigger the clause.

Changing the date for the deliveredAt parameter in the request and triggering the contract again will result in a different penalty. 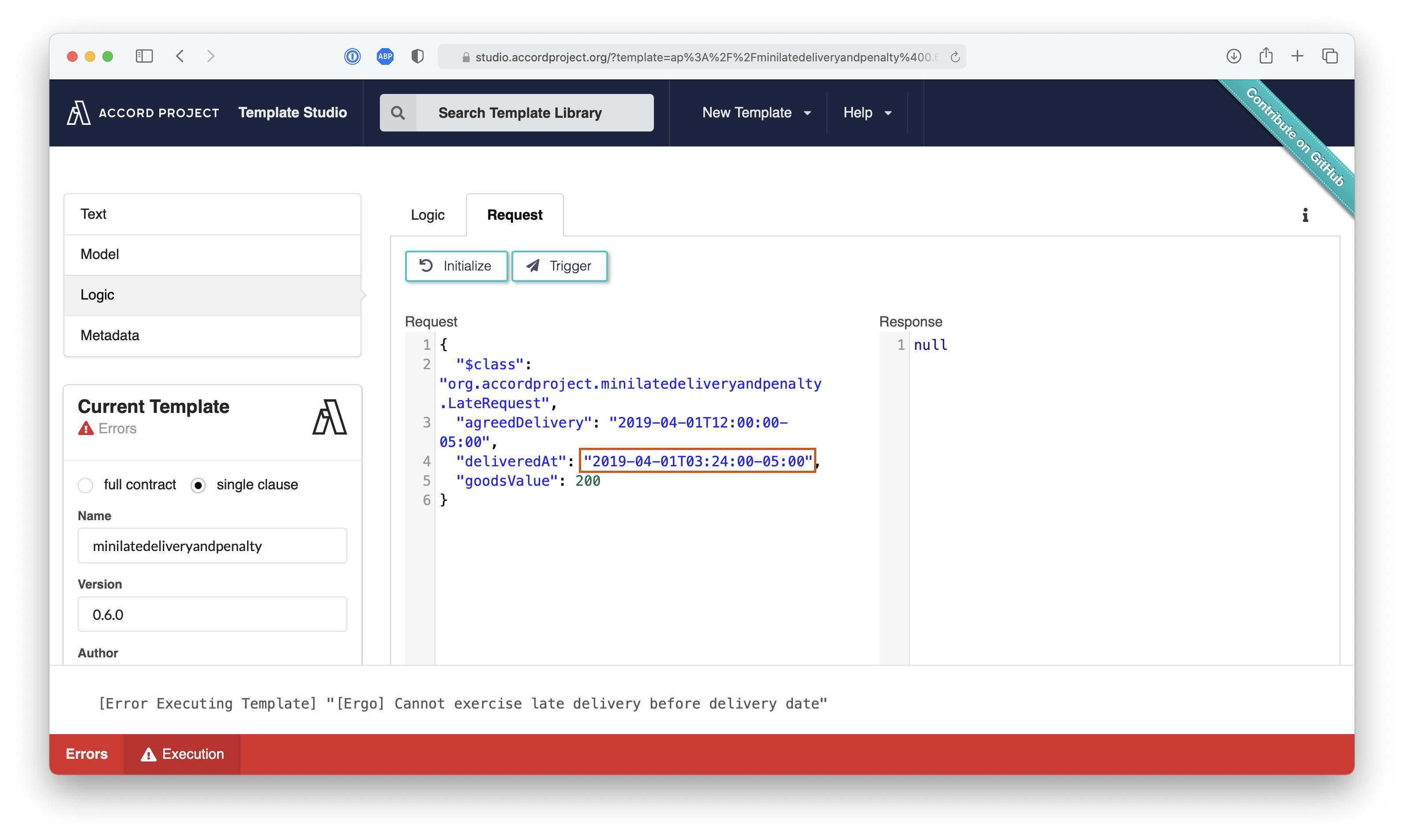 We can now start building a more advanced clause. Let us first take a moment to notice that there is no limitation to the penalty resulting from a late delivery. Trigger the contract using the following request in the Request tab in Logic:

To implement this, we first go to the Grammar tab in the Text section and add a sentence indicating: The total amount of penalty shall not, however, exceed {{capPercentage}}% of the total value of the delayed goods. 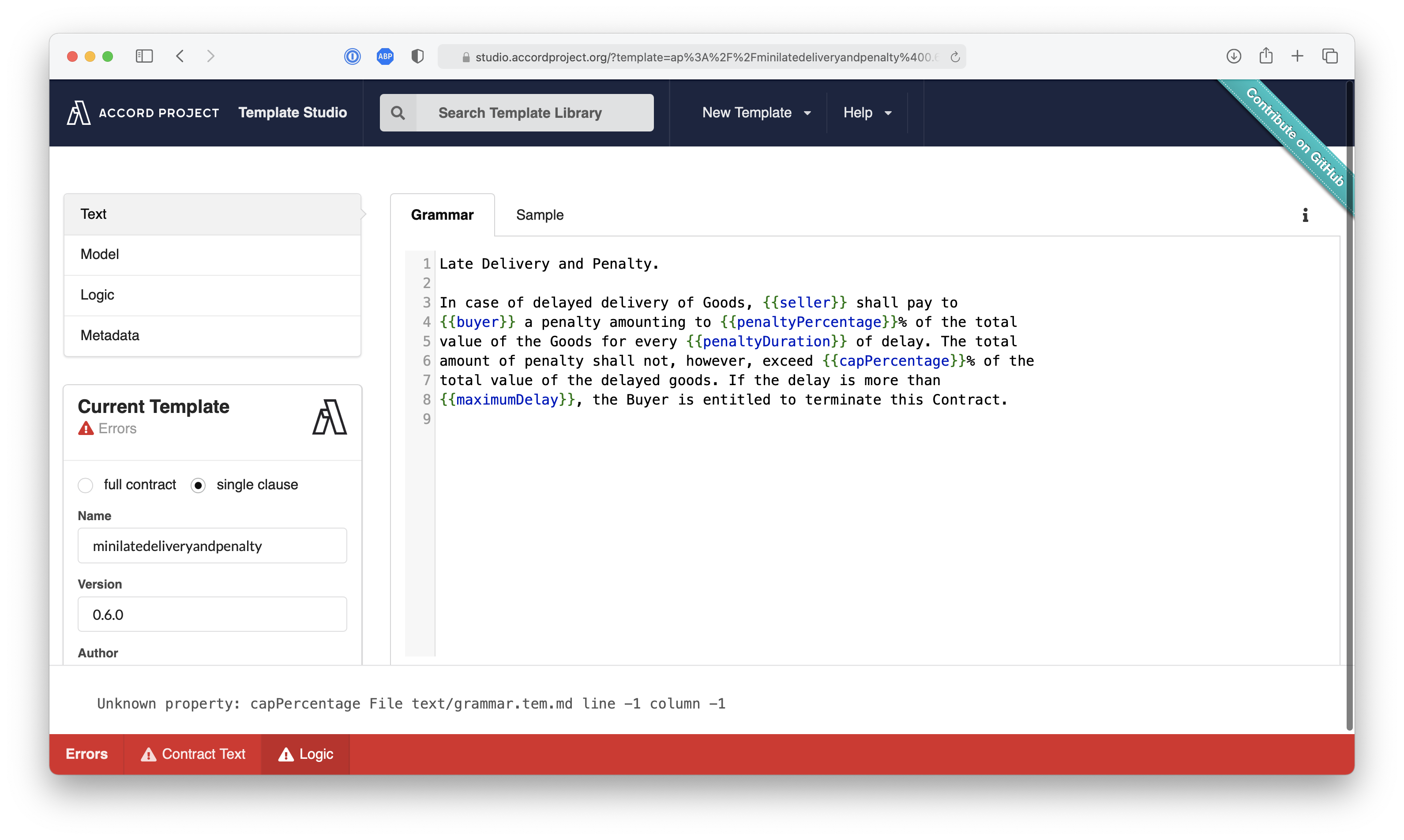 This results in a new error, this time on the sample contract: 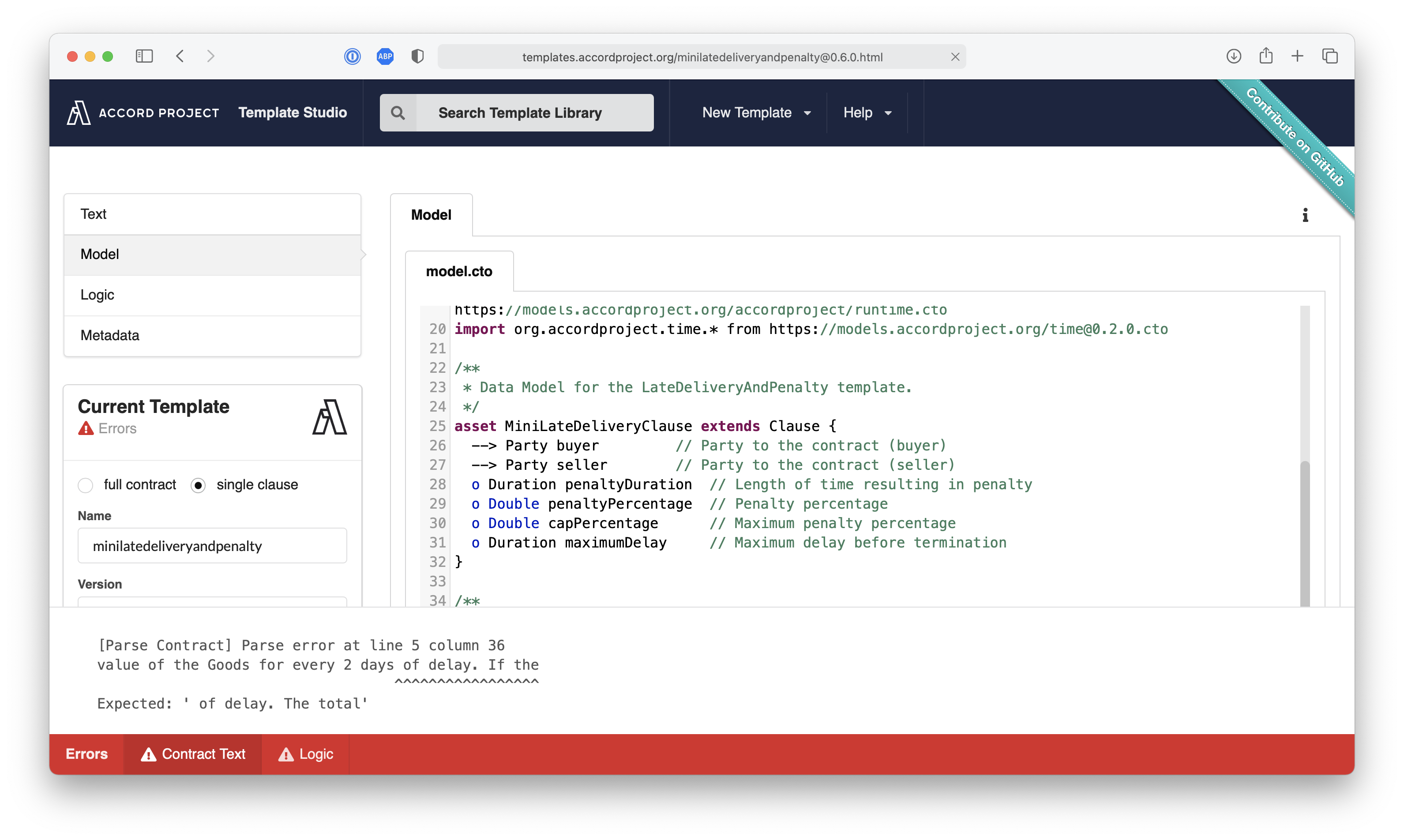 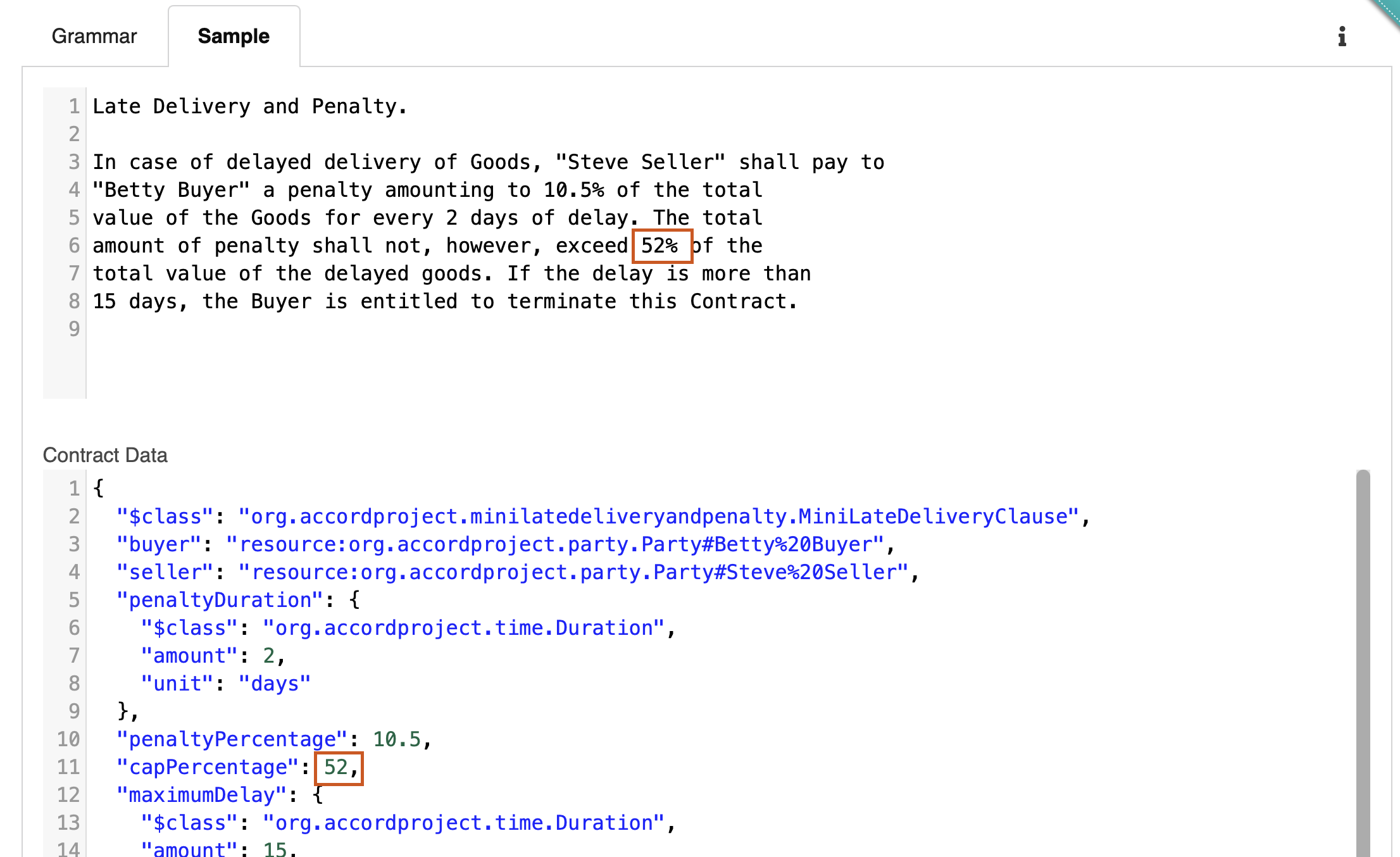 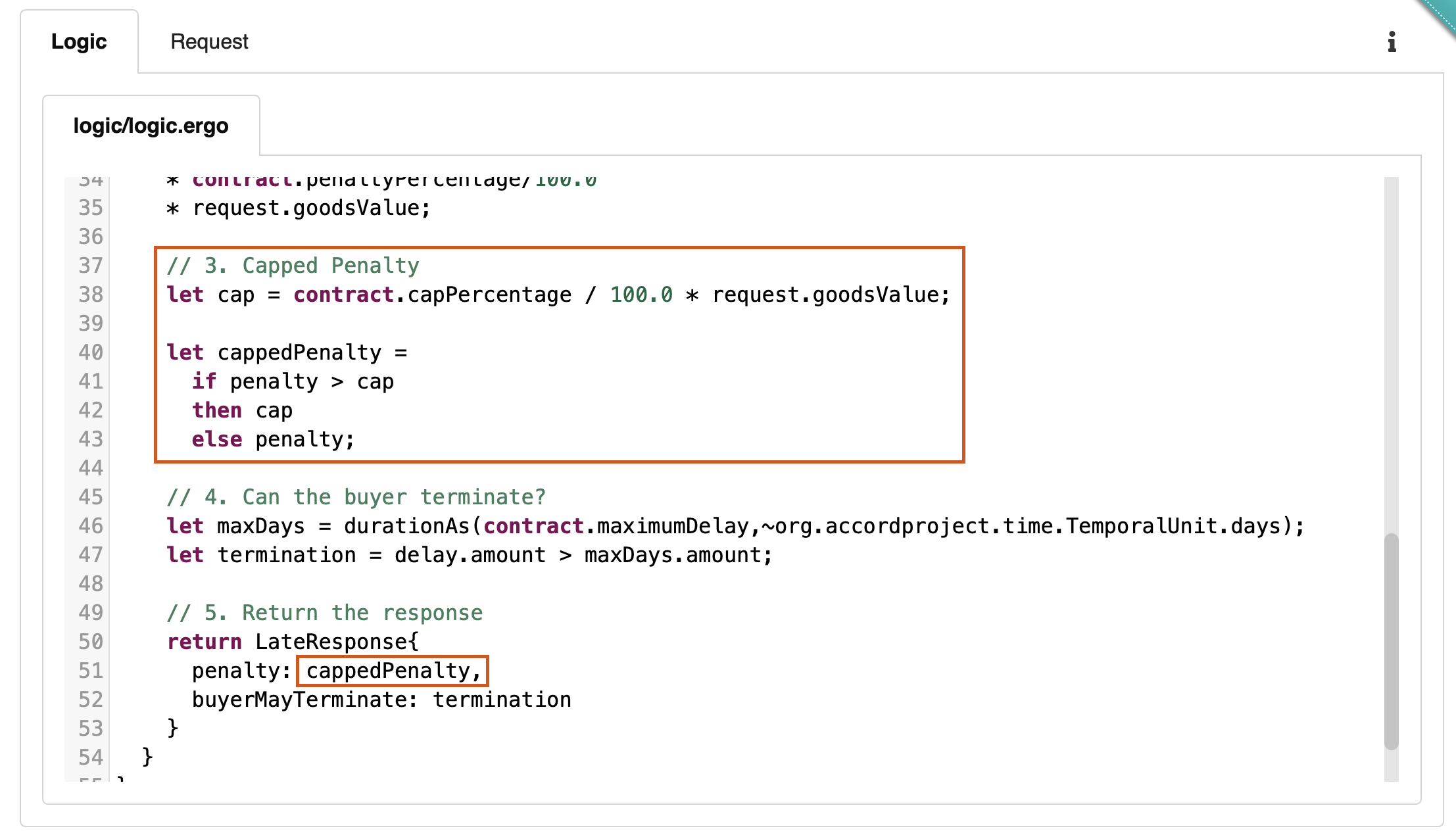 The first place to change is in the metadata for the template. This can be done easily with the full contract button in the Current Template tab. This will immediately result in an error indicating that the model does not contain an Contract type. 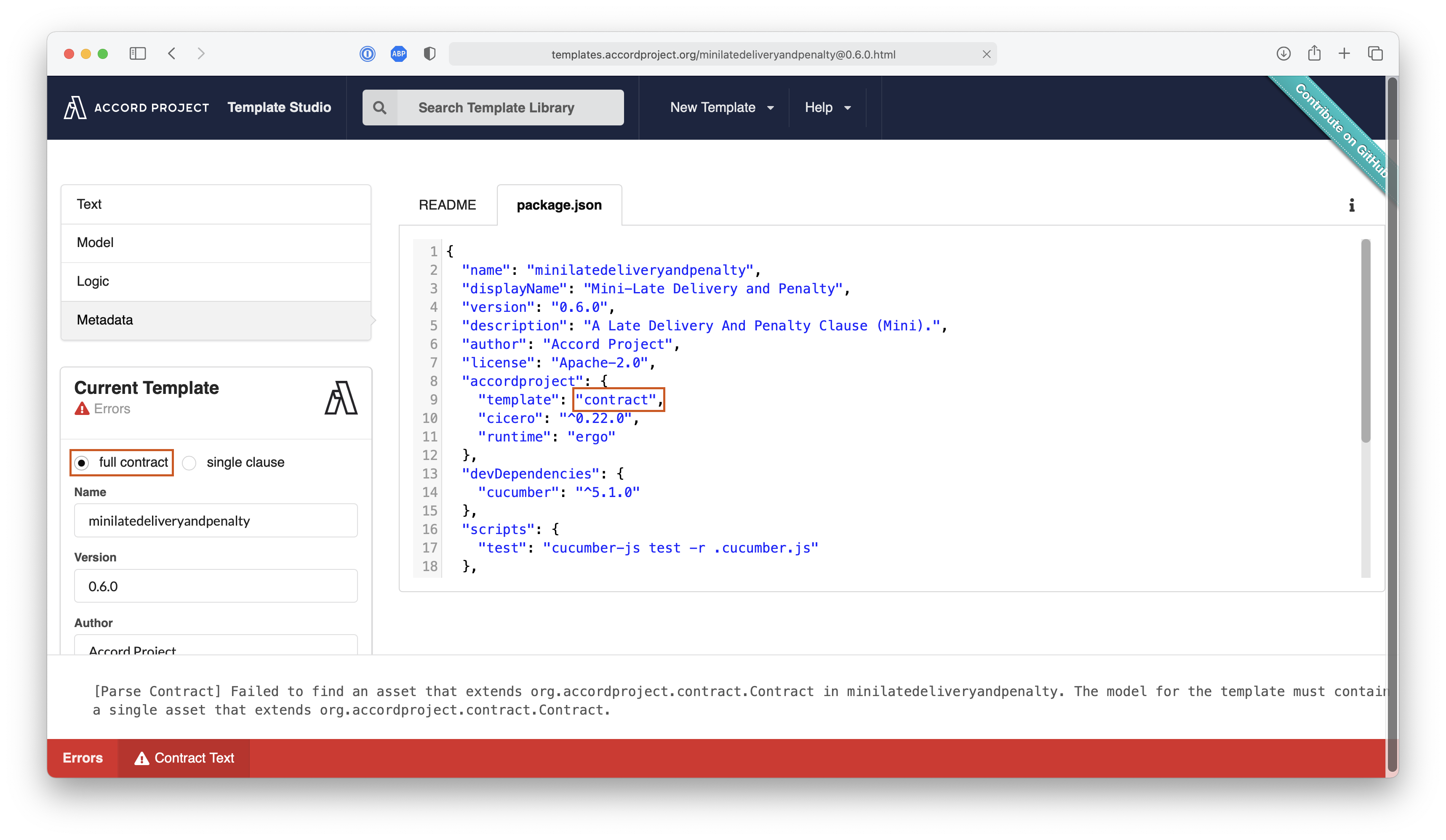 That's it! You can observe in the Request tab that an Obligation is now being emitted. Try out adjusting values and continuing to send requests and getting responses and obligations. 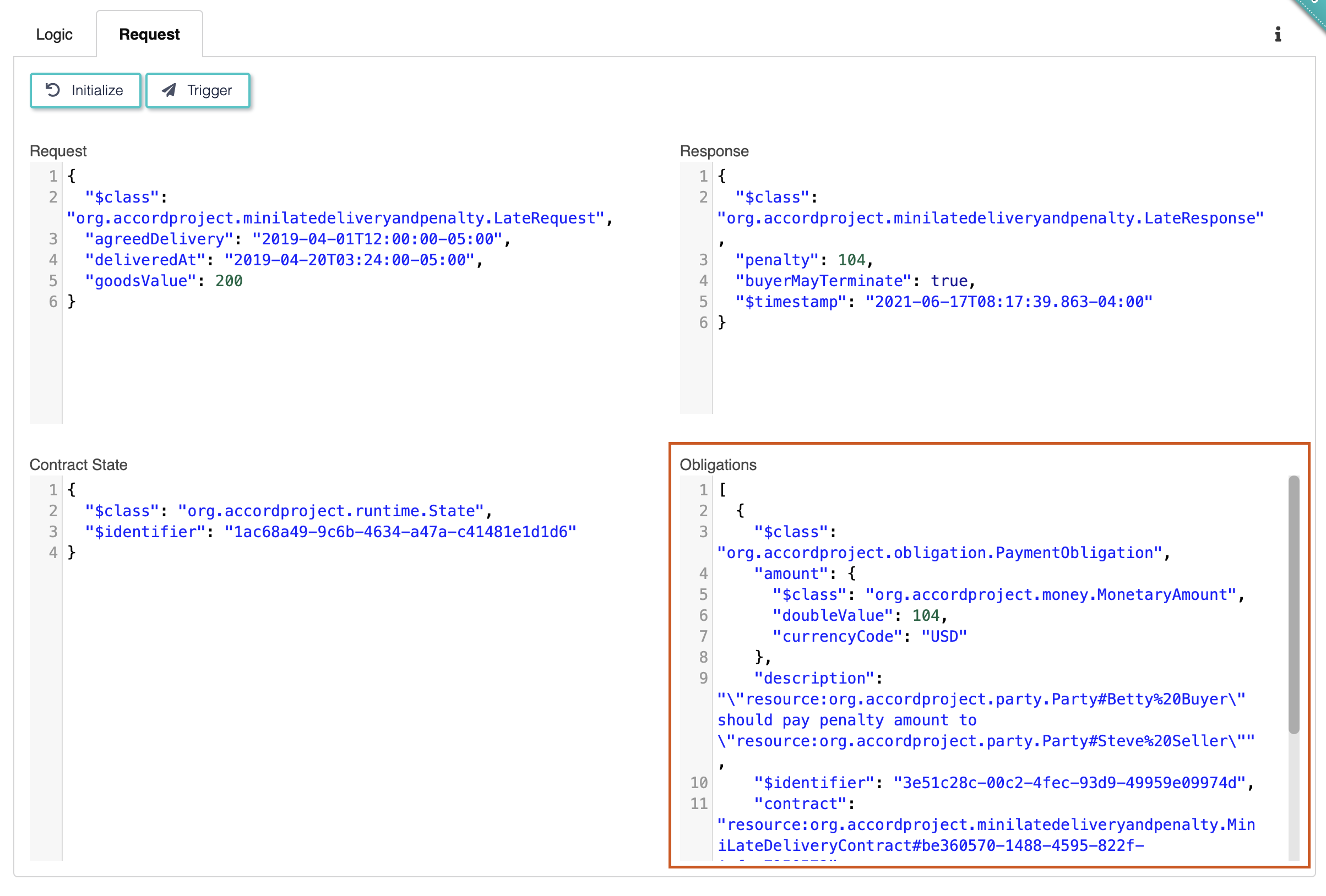 A full version of the template after those changes have been applied can be found as the Mini-Late Delivery and Penalty Payment in the Template Library.